At first glance, many pneumatic screwdrivers look alike. In fact, so much so that we receive a lot of calls from customers simply asking for a replacement "air screw gun". While they all do in fact drive screws, air powered screwdrivers are specialized tools that vary greatly in their torque output, speed, shape, method of activation, and most importantly their clutch.

In this guide to pneumatic screwdriver selection, we touch on all the points above and place a special emphasis on the tool's mechanical clutch which is the most important, but often overlooked part of the tool.

So lets jump right in...

The first step in choosing any pneumatic screwdriver is to determine how much torque (twisting force) is required for the joint you are assembling. In the assembly tool world, torque is measured in inch pounds, foot pounds, or newton meters. Without a clearly defined torque specification (or at least an acceptable range), you are going to have a hard time choosing a tool.

Below is a chart from Ingersoll Rand's screwdriver catalog that shows the torque ranges of a few popular models. The chart is broken into three columns because these particular tools come with three different clutch springs, each delivering a defined torque range. The total range of the springs combined reading from left to right makes up the tools entire range.

For example model 1RLNS1 has a total torque range of 2.7 to 30.1 inch lbs., but utilizes three different springs to cover the entire range. Therefore, if your target torque for example was 17 inch lbs., you would want to install the middle spring. 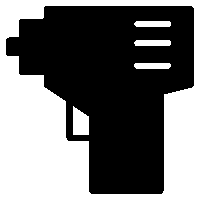 Air powered screwdrivers are typically offered in either a pistol grip or inline orientation. The goal is to select the style that will allow the operator to perform the run down with the least amount of physical exertion and with the best ergonomics possible.

For an operator driving screws into a part laid horizontally on a workbench, you don't want a pistol grip tool because the operator will spend the entire shift with their body bent and elbow cocked in the air. The better choice here would be an inline screwdriver suspended from a tool balancer. Alternatively, an operator assembling a piece of furniture directly in front of them should use a pistol grip tool so they can access the fastener head on, without the need for unnatural bending of the wrist and elbow.

Here are some photo examples to clarify: 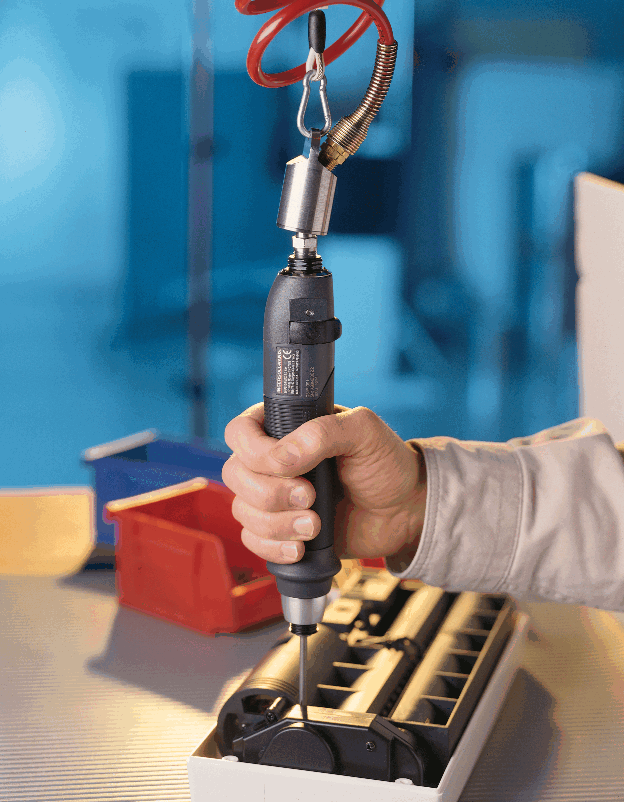 A work piece laid flat on the bench with fasteners facing vertically requires an inline screwdriver and a top to bottom approach. 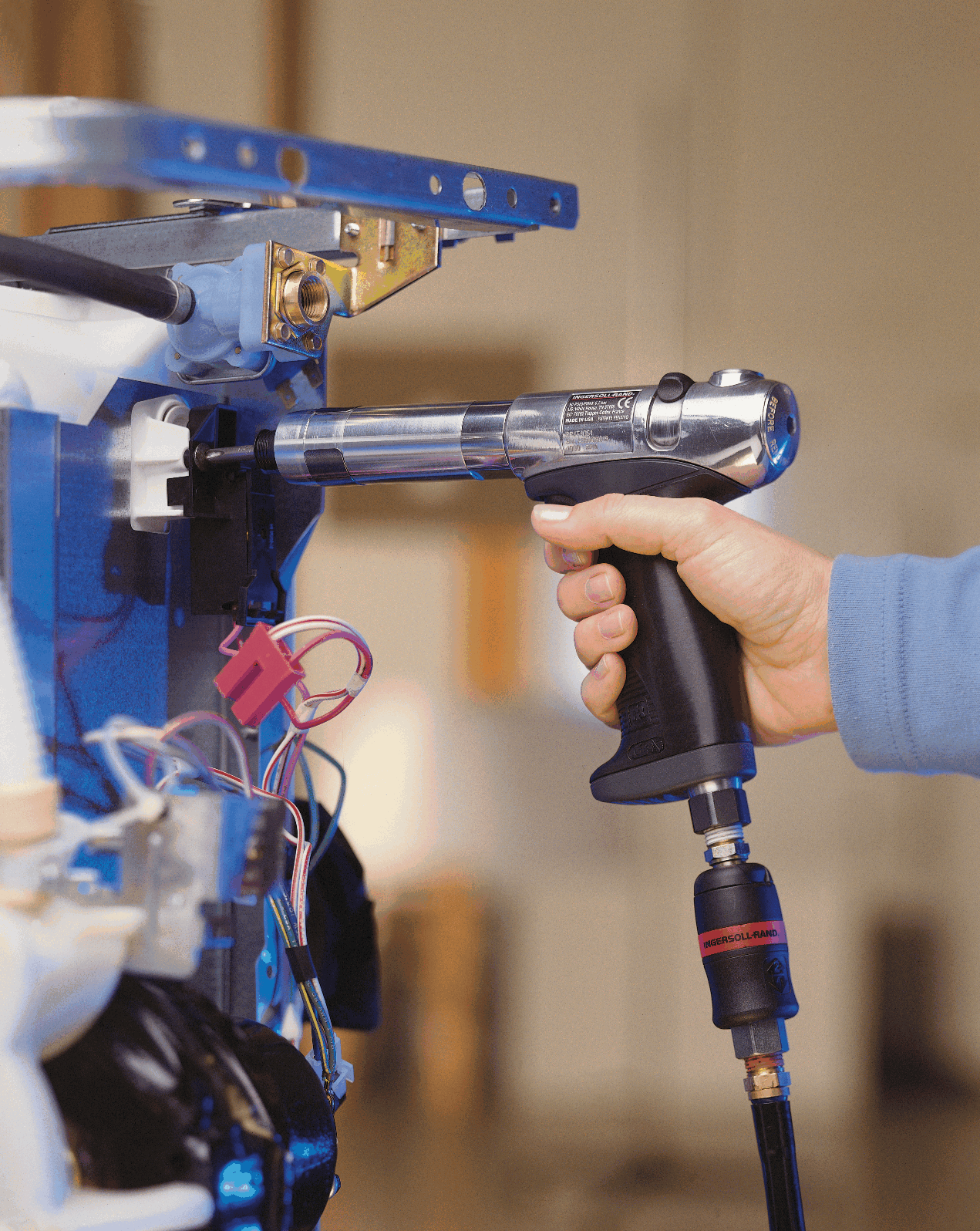 For a part placed right in front of you where the fasteners are driven horizontally, the logical choice is a pistol grip screwdriver. 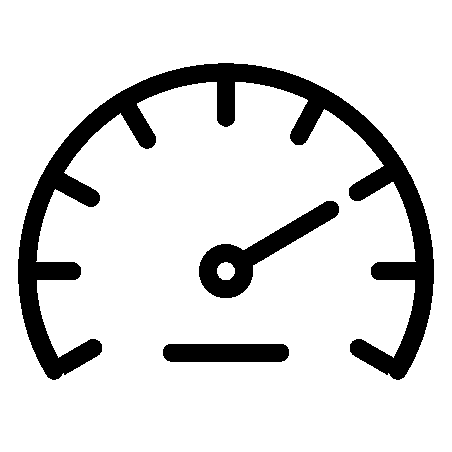 There is an opposite (inverse) relationship between speed and torque. Pneumatic screwdrivers are geared so that the models with the lower torque ranges spin faster, while the higher torque tools will always rotate slower.

When choosing the speed of your screwdriver, refer to the torque range guidelines above and be mindful of the composition of the material you are working with. If you are assembling metal on metal joints you are probably fine with a high speed tool. Conversely, if you are running small screws into plastic, wood, or other softer materials (that could potentially strip), opt for a slower model that still allows you to achieve your desired torque.

Faster is not always better and more RPM's doesn't translate to more power. Too fast of a tool in inexperienced hands can cause a screw to walk all over your freshly painted part.

Hang with me on this next section, as all the different activation options can get a little tricky... 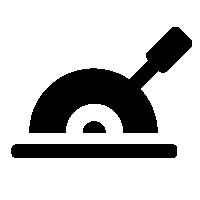 Method of activation is largely selected based on operator comfort. Generally speaking, high volume applications that are not highly susceptible to stripping lend themselves to the push to start design. However, push to start tools have a tendency to wander more. In contrast, critical assemblies requiring careful pre-alignment of the screw should be fastened with a lever or trigger start tool to prevent cross threading.

90% of the air screwdrivers out there are equipped with a 1/4" female quick change bit holder like the one shown on the orange Cleco screwdriver below. This is your standard spring loaded "chuck" designed to accept 1/4" shank male bits with the familiar hexagonal shape. These bits are sometimes referred to as power bits. The knurled outer sleeve is slid forward or backward (depending on the model), the bit is inserted, and then the sleeve is returned to its original position to secure the bit.

Much less common on right angle screwdrivers (commonly referred to as nut runners) is the 1/4" square drive shown in the angle tool below. This tool is designed for use with 1/4" sockets:

And now here it is, the most important part of this guide... 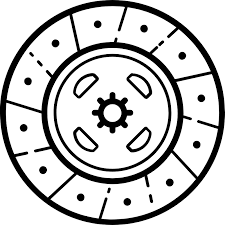 The hardness of the joint being assembled, the material into which the fasteners are being driven, and the need for torque control largely determines which type of mechanical clutch should be selected.

What follows is a discussion of the 4 most common types of screwdriver clutches...

The most popular screwdriver clutch out there is the precision shut off clutch...

#1 - Precision Shut Off Clutch - Highly precise and repeatable torque limiting clutch that is pre-calibrated prior to production use The precision clutch is desirable when the same amount of torque needs to be applied to a high volume of screws with as little variation as possible. The tool shuts off automatically once it hits its preset torque which prevents the operator from over-torqueing the fastener. Precision shut off clutches are repeatable within 10% to 20% of the target torque depending on the make and model.

Here is a picture of a precision shut off clutch found on a typical torque controlled pneumatic screwdriver:

The precision shut off clutch is calibrated using a torque meter before the tool is placed in production. This type of tool is typically not adjusted at the workstation and having an operator adjust the clutch is usually undesirable. Precision clutch tools are used in electronics, automotive components, medical device, and some wood applications such as speaker and musical instrument assembly.

#2 - Cushion or Ratcheting Clutch: The cushion clutch is the one you are probably already familiar with because it is the type of clutch present on most commercial (Dewalt, Milwaukee, Makita, etc.) drills sold at big box retailers. Also, referred to as a slip clutch, this tool audibly ratchets once it hits its preset torque. This is the loud ratcheting sound we often hear coming from construction sites. In contrast to commercial power tools, industrial grade pneumatic screwdrivers have no external adjustments and must be calibrated on a bench using a torque tester.

The cushion clutch is a general purpose clutch which is accurate, but not as precise as the shut off clutch above. It is designed for non-critical joints requiring consistent torque application. Use this tool on hard and semi-hard joints in general manufacturing applications. This reliable clutch is popular for assembling toys, appliances, electric power tools, and lawn and garden equipment.

Now for any wood hackers or tin bangers out there here is the clutch for you...

The positive clutch screwdriver features two opposing jaws that rotate as one when forward pressure is applied to the screwdriver bit.  As the torque of the fastener begins to overcome the power of the tools motor, the opposing jaws separate, which stops the spindle from rotating and prevents further torque delivery. Operators are however able to apply forward pressure to the bit to re-engage the clutch and "squeeze" some additional torque out of the tool. In the interest of preventing overtightening, this clutch is best used in the hands of trained and experienced operators.

The positive jaw clutch has its place in manufacturing, but is not a precision assembly tool. Maximum torque output is controlled by a combination of regulated air pressure and the proper use of the opposing jaws discussed above. These tools are well suited to furniture manufacturing and sheet metal work with self tapping screws. Because of their thread cutting and self tapping nature, they are frequently offered in higher torque ranges than their precision or cushion clutch counterparts.

Last but not least, no clutch at all...

#4 - Stall Tools - With a direct drive (stall) screwdriver, the tools output shaft is couple directly to its air motor. There is no clutch present and torque output is controlled entirely by the air pressure fed to the tool.

Once the torque of the fastener overcomes the output power of the motor, the tool "stalls" and stops rotating. The benefit of direct drive or stall tools is that they are compact, lightweight and maneuverable in tight spaces. They are also rugged and have fewer parts to maintain. The disadvantage is that they have no torque limiting device except for lowering the air pressure.

Direct drive tools are great in soft material applications such as wood and driving sheet metal screws. A talented operator can be trained to use a stall tool by feel without over or under torqueing fasteners. Direct drive screwdrivers are great for non-critical joints without an exact torque spec and application that that simply need to be "tight."

To wrap it up, pneumatic screwdriver selection should based on both the application and operator safety. The three main main points to consider are:

We know we have covered a lot in this guide and are here to help. If you have an application you would like to discuss, we can help you choose the right air screwdriver for your assembly job. We have been been consulting manufacturers on their applications for 16 years and are dedicated to helping our customers be more productive We live and breathe this stuff every day. Give us a call at (800) 68-5210 or use the contact us page to send an email and we can figure it our together.