Anyone familiar with industrial metalworking can attest to the quality and durability of the Dotco brand of pneumatic die grinders. Nevertheless, due to recent re-branding and the now interchangeable use of the Cleco and Dotco names; it's hard to decifer each tools intended usage or why so many variations of a simple tool need to exist. In fact, the latest Cleco Production Tools catalog contains no less than 17 pages dedicated to collet style die grinders alone.

In this guide, we set out to clearly explain the features and benefits of each tool, so you can make an informed decision when buying your next Dotco (or Cleco) die grinder.

Long time air tool users may remember when the Dotco, Cleco, Buckeye, Gardener Denver, and Master Power brands all belonged to Cooper Power Tools based in South Carolina. This is no longer the case. The current parent company, Apex Tool Group (ATG), was formed in 2010 through a joint venture between Danaher Corporation and Cooper Industries. The company was later sold to private equity firm Bain Capital who remains the sole owner of these brands today.

New ownership in any organization inherently brings change, and the re-branding of the Dotco line of grinders is no exception. The short of it is that Dotco, Cleco, and Master Power are now treated as sub-brands of what is now known as Cleco Production Tools. The original Cleco brand is still just Cleco, but the other brands have been sub-categorized as Dotco by Cleco or the Cleco MP Series (formerly Master Power). Gardner Denver and Buckeye have been discontinued entirely. Whereas in the past, the Cleco brand was associated primarily with assembly tools (and a hand full of grinders), the Cleco Production Tools moniker now covers all assembly and material removals tool in the line up.

Here is a Summary:

In order to fully understand what you're getting when you buy any die grinder, it's a good idea to understand the salient  characteristics that define them. While some of the following may seem familiar and obvious, other points are more subtle, but can prove equally as important in selecting the right tool.

Series HG Collets are prominent on Dotco precision and pencil grinders of both the rotary vane and turbine varieties. The HG series collets thread on to the chuck body of the tool itself.

Here is an example of a model  10R9000-03 turbine grinder with the collet removed. Note the threads on the end of the collet that faces the tool: 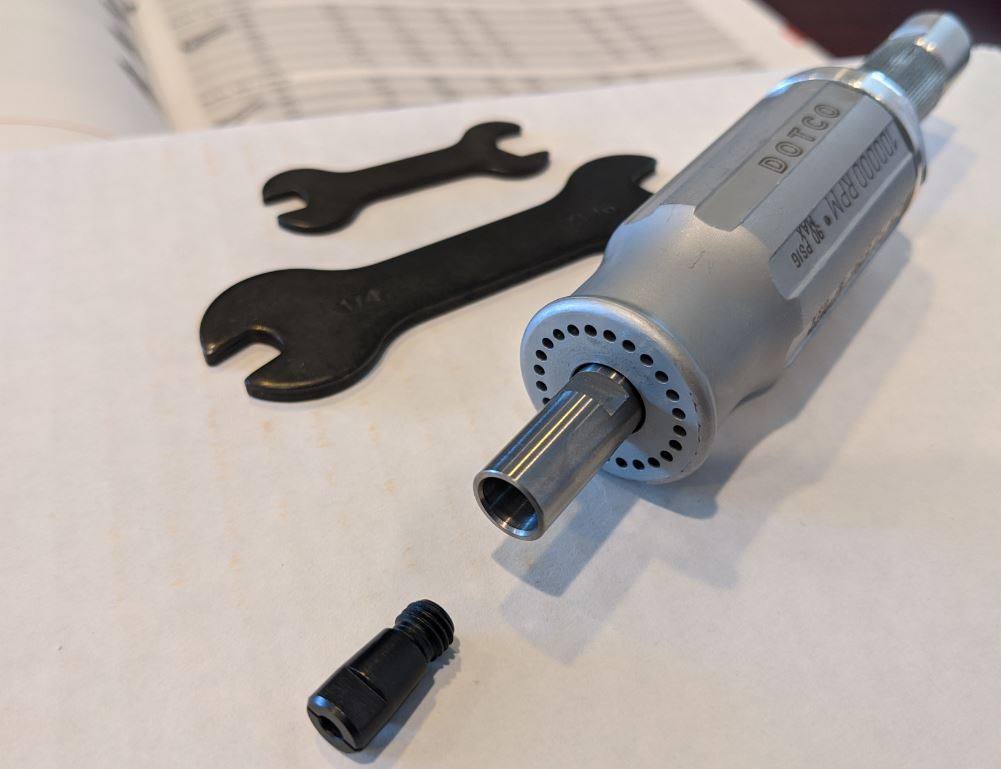 The 300 series collets consist of a collet cap and a nose-piece that the collet nests in. The whole three piece assembly then threads onto the tools chuck body. The 300 series system is long and slender which may offer better accessibility into recessed work areas. I have included images below for clarity: 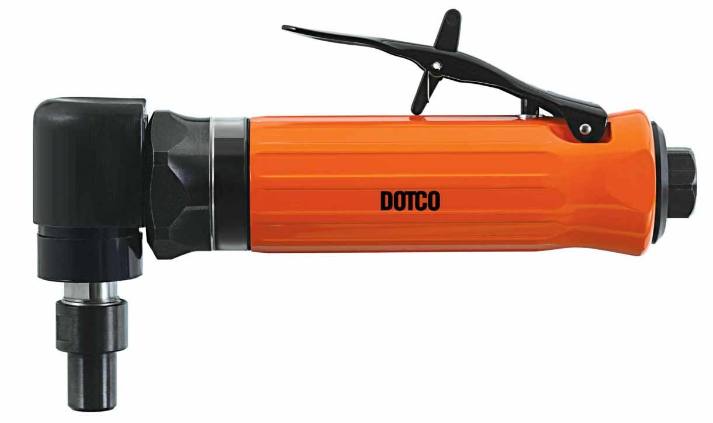 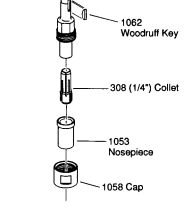 200 Series collets don't utilize the nose piece seen above, and the collet itself nests directly into the spindle (chuck body) of the tool. Example #1 below depicts a 200 series collet system found on inline (straight) die grinder. Example #2 tool shows you what it looks like on a right angle die grinder: 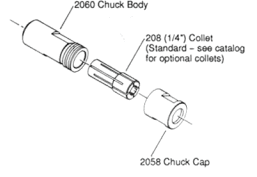 The bottom line is that the the 300 series, with its slender nose piece for its accessibility into restricted work areas, features a taller, 3 piece design. The 300 series is shorter, more rugged and offers a simpler design.

The Relationship between RPM and Torque:

Dotco grinders use their motor, governor and/or bevel gears to get RPM's to the tool's spindle. The higher the RPM's, the lower the stall torque of the tool. Conversely, tools with lower RPM's are going to put out more torque and be harder to stall. Faster is not always better and you want to choose a tool based on whether you are roughing or finishing. Higher RPM tools are better for final detail work, while slower RPM tools offer faster material removal rates. Operators should let the tools RPMs and torque do the work for them. "Leaning into" a tool doesn't yield more grinding productivity and stalling out the spindle of an air tool just to demonstrate machismo is downright dumb.

Gears or No Gears:

Most Dotco grinders are governed or geared in order to obtain the torque to speed ratios described above. However, there are gearless models available where the air motor is connected directly to the output spindle of the tool. In a right angle gearless grinder, the motor is placed vertically in the head of the tool to eliminate the need for bevel gears. Gearless models put off less vibration, but also have less torque than their geared counterparts. The main advantage of gearless grinders is that they are less expensive to maintain.

This series of articles covers Dotco die grinders that use a collet system to mount sanding and grinding accessories. We will not cover threaded spindle tools (i.e. 5/8"-11 angle grinders) in this guide. We begin below with pencil and precision grinders, and in part #2 move on to 1/4" inline die grinders. We conclude the series in part #3 with a thorough discussion of Dotco right angle die grinders. 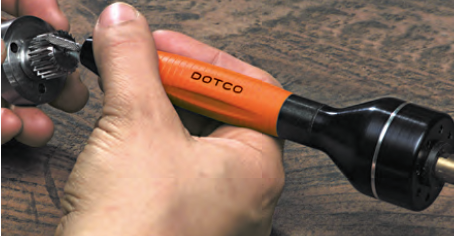 These high quality, American made precision grinders feature: a high speed turbine motor, lubrication free operation, and high precision ball bearings for extended life. A variable speed roll throttle allows you to control the RPM's which when combined with the low run-out spindle leaves a superb finish on parts. The tool is lightweight, quiet, and puts out super low vibrations which amounts to greater operator ergonomics and less fatigue. A rugged aluminium housing holds it all together. Excellent for de-burring exotic alloys in aerospace or turbine engine applications.

Less of a pencil grinder, but definitely still a precision grinder, this tool incorporates the body of a traditional inline die grinder with a high performance turbine motor for fast material removal rates. While not as compact as the 10-90 series, the 10-95 series is more rugged and better suited to operators who have been accustomed to using a standard size die grinder. Good precision grinder for guys with big hands and no lubrication required! This tool is better suited to fab shops and general manufacturing.

The 12R91 series turbine grinders feature a governor that adjusts air intake to the motor based on the amount of load placed on the spindle. This feature is designed to prevent stalling when you are really trying to hog off material (relatively speaking, this is only a .10 HP tool). The 12R9 series is also the slowest speed Dotco Turbine Grinder and at 65,000 RPM, will produce a bit more torque than its counterparts above. Just to re-emphasize turbine air motor utilize precision ceramic bearings and do not require lubrication. This is a great general purpose turbine grinder found across a broad range on industries.

The 12-03 series is unique in that it features a gearless design. The tool uses a traditional rotary vane air motor which has been mounted vertically in the head. The output shaft of the tool connects directly to the air motor eliminating the need for a gear train. The composite body essentially contains just the valving and not much else. This is a great tool for work that requires a ninety degree approach, and the lack of gears in the head allows for decreased maintenance. At 80,000 RPM the tool falls in the middle of the pencil grinder speed range. A variable speeds roll throttle controls the fun.

The 10-04 series is a rugged, 60,000 RPM precision grinder that utilizes industrial grade ball bearings in its construction. The tool's most notable characteristic is its durable design. With an aluminum housing and collet guard protecting moving parts from debris and impacts, the 10-04 will be part of your finishing operation for many years to come. The only disadvantage of an all metal housing tool, is that some operator's complain that the tool gets cold during continuous use. A high quality pair of work gloves solves the problem. Exhaust air gets piped away from the workstation through the use of the supplied over hose.

The MP Series is Cleco's re-branded version of the old Master Power tools which were formally blue. In form and function they are the exact same and the only thing that has changed is the color of the housing. The MP Series are imports and are best suited for the value minded consumer who will give them occasional use. Nevertheless, they are slim, comfortable, and able to fit into to tight spots. The MP4200 model features double ball bearings to ensure smooth running and a longer service life. Just keep in mind, that the internal parts of these tools are not made from the purest metals, nor are they machined to the same tolerances as their industrial counterparts. For maintenance work these are a fine choice, but for production work you should choose and industrial model.

The 220G is an interesting take on the industrial grade pencil grinder and is definitely designed for intensive production use. The most stand out characteristic is the tools pull style rear throttle. Internal components are machined and heat treated and the tool uses premium quality bearings to ensure low run out, high concentricity, and a long service life. This grinder is American made. Standard equipment includes an exhaust over-hose, a built in air filter, and an integrated speed controller. The 220G is offered stand alone or in a  pencil grinder kit which includes an assortment of carbide burrs, mounted points, and a blow molded carrying case. Cleco even offers a model without the rear pull throttle which activates once connected to an air supply and is designed to be used in an automated / fixtured environment.

By far and away the most industrial Dotco precision grinder on offer. At 40,000 and 50,000 RPM respectively, the 14/18 series is where the line between precision grinder and traditional die grinder starts to blur. With its steel housing and all industrial ball bearings, If you are looking for a super duty precision grinder, you've just found it. At only 3.8" long in the roll throttle version and 5.9" long with a dial (shown above), the Dotco 14/18 is as compact as it is tough. This tool is offered standard with either 1/8" or 1/4" collets, but has a separate part number for each, so be sure to order the right one. Use this tool with confidence in harsh environments such as foundries and polishing shops.

While less of a grinder and more of an engraver, this Dotco air marking pen is handy for marking tools and parts around the shop. There are certainly less expensive options out there, but by going American made, it will probably be the last pneumatic engraver you ever buy. The tool features a pull style throttle and an 1.8" carbide tipped replaceable stylus. Buy the kit and get a durable carrying case and a 5' air hose included. Demand Dotco quality for your industrial engraving needs.

This concludes our first part of the this two part series. Hopefully we have provided you enough ammunition to allow you to make an informed decision when choosing your next Dotco Precision Grinder. In part two of the series, we will breakdown the different Dotco 1/4" die grinders, which comprise the heart of of the line up. Until next time, thanks for reading and happy grinding...